Outsmart Murphy When Undertaking DIY Renovations On Your Louisville Home

The unwritten law of home repair and renovation is that almost everything takes more time, money, and often skill than you plan on. What seems like a minor project can become major in an instant. You may even find that Murphy's Law takes hold and everything that can go wrong will. To prepare for this scenario, you should ask yourself some serious questions to outsmart the ubiquitous Murphy.

What If Your Problems Are More Than Skin Deep?

Especially if you have an older home, doing a minor kitchen renovation can uncover a budget-sapping electrical or plumbing problem you must fix before you get on with your plans. Many times, what you uncover is a potential safety issue, so you have no choice about fixing it. You have to consider whether you have the skills to attend to what you find. Just because you think you can handle installing a floor, light fixture, or a faucet does not mean you are prepared to rewire or replace power line. You need to call in a contractor, at least for this part of the project. This is a wise choice, but it will add to your budget.

What Is Your Vision For The Project?

The bigger the project you want to do, the more likelihood it is than will exceed your design expertise. You may think you know what you want to do, but if you are planning on much more than cosmetic fixes, calling in an interior designer will give you some great ideas. Many home stores and even contracting firms have design services that will help you clarify or maybe even redefine your vision. Even if you are tackling a landscaping job outside, a consultation from a nursery with a landscape designer can get you on the right track.

What Is Your Skill Level?

DIY projects are good training opportunities as long as you do not try to greatly exceed your skill level. Have you ever done the type of work before? Do you have time to learn?...

Keeping Cool In Louisville With An Expansive Tree Canopy

This past weekend in Louisville, you might have gone to Abbey Road on the River in Belvedere Park, the Kentucky Reggae Festival at the Water Tower, or the Mayor's Healthy Hometown Subway Fresh Fit Hike, Bike & Paddle atWaterfront Park. This week, you might hit the Butchertown Art Fair or other outdoor activities. . When it is in the 70's you will probably enjoy being outside. When it is humid, and 10 or 20 degrees hotter, you will probably appreciate being anywhere where there are some trees to shade the area.

Maintaining the "tree canopy," the layer of leaves, branches, and stems of trees that cover the ground when viewed from above," has long been a contentious issue in Louisville between developers and tree lovers. While developers see trees as "curb appeal," environmentalists and our local Tree Commission see them a crucial ally in the war against global warming and a natural cooling mechanism..

As researcher Brian Stone of Urban Climate Lab at Georgia Tech noted in a recent study of 50 cities, Louisville shows the biggest disparity in temperature between its metropolitan area and rural outskirts. Between 1961-2010, we saw a difference of 1.67º - double that of Phoenix, the second highest city on the list. The result is a "heat island," which is a public health issue in a heat wave. One major contributing factor in Louisville is the climate of the Ohio River Valley, but the lack of trees is another. “The tree canopy downtown is one of the sparsest of any city I have seen in the country,” Stone said – only...

Portland: A Neighborhood To Consider When Searching For A Home

With great homes in short supply In Louisville, you might have to get creative if you want to buy a home, especially if you are on a strict budget. This may mean you need to look outside your preferred neighborhood and/ or consider a fixer-upper to find what you want. Since Louisville is a city that places great value on preserving and rehabbing the past, you might be able to find a home that has been updated in an interesting neighborhood.

The Portland neighborhood is a perfect example of an area where you might soon look for a renovated home that offers history and personality. Through the efforts of Habitat for Humanity, New Directions Housing Corporation, and private developer Gill Holland, over $25 million will modernize three areas within a mile of downtown.

Habitat for Humanity, now based in Portland, has joined forces with New Directions Housing Corporation to build new homes and upgrade some of the many vacant and raggedy homes in an area bounded by Bank, 19th, and Rowan streets. With $1.75 million from the federal Neighborhood Revitalization Strategy Area funds, a $750,000 grant from the matching funds grant from the Graham Brown Foundation, and fundraising efforts, the newly-formed Portland Neighborhood Initiative will invest $3 million in the area over two years.

Some of the funds will go to repair owner-occupied homes, a move designed to improve curb appeal and real estate values, as well as stabilize the neighborhood. This part of the project has attracted more funds from organizations such as Preservation Louisville's Save Our Shotgun (SOS) Initiative, the Kentucky Housing Corp, Affordable Housing Trust Fund and the Federal Home Loan Bank. Over 30 homes have received exterior restoration and renovation at no cost to the homeowners.

This new effort is in sync with the work that New Directions, Habitat, and other groups have... 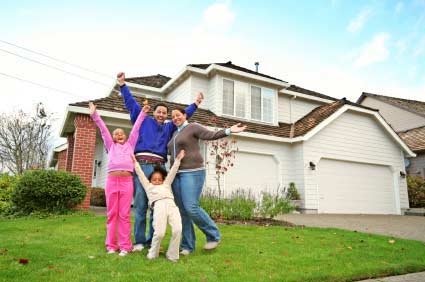 When you buy newly constructed house, you may be looking for home for your family but your purchasing dollar goes a long way toward enhancing the local community. As noted in our previous blog about the benefits of buying local, you can keep the maximum amount of money in town by using local suppliers and independent businessmen men and women. Real estate money is local money!

The National Association of Home Builders (NAB) recently offered some statistics about   the economic impact. They claim that during the first year a house priced at $321,000 creates 3.24 full-time local jobs, $211,000 in local income $22,000 in taxes and fees for the local governments. On a permanent basis, this same house generates $31,000 in local spending, $7,430 in local taxes and .5 local jobs.

The statistics blur the fact that over 250 jobs are involved in building a 1200 square foot home, so the building process employs local tradesmen, office workers, estimators, accountants, supervisors, inspectors, and many others in different parts of the process. This has a local multiplier effect, so every dollar spent on a house produces $.48 of direct spending for wages and supplies and a ripple effects of $.52 beyond what spending in restaurants, retail stores, gas stations, and more. Once the home is built, new homeowners spend additional money on landscaping, appliances, furniture, curtains, and other items for their...