With Thanksgiving coming up this week, animal lovers have a problem. Assuming you are a meat eater, you may want a locally grown bird that was raised under humane conditions. You also want a turkey that is flavorful. If you have high blood pressure, you may also be concerned about the amount of sodium in the grocery store products. Locally grown Louisville birds might fill the bill.

What Makes A Humanely-Grown Bird?

What makes a turkey "humanely grown?" The difference is in how the birds are allowed to live their lives before they meet their fate. Unlike many grocery store birds, they are not confined. Enjoying a "free range" upbringing, they spend their days foraging pastures, but have a shelter to retreat to that shields them from sun, wind, and rain. Their food consists of grasses, bugs, locally-grown grains and organic supplements. In contrast, the birds most Americans eat have been pumped full of growth supplements, antibiotics, and liquids in the processing stage. By the time they are ready for slaughter, they are so top-heavy they can barely walk and spend their days eating, confined to one place.

How Do They Taste?

Local grown turkeys may have a different taste than the frozen varieties. Unlike their "broad breasted white" brothers and sisters in the grocery store, Heritage breeds, such as Narragansetts and Jersey Buffs, have a rich flavor with meat that is moist, more dense, and darker in color. Smaller than the white turkeys, they cook more quickly at 425-450° and should only be cooked until the internal side temperature reaches 140 after 150 F common 20 to 30° lower than white birds.

Supermarket birds are injected with a mix of water, salt, food starch open) MSG), sodium phosphates, and natural flavors to plump them up. Even though some manufacturers such as Butterball advertise that their meat is free of hormones, a 4 ounce serving of their product...

"Be Prepared" Louisville - A Motto Not Just For Scouts

Posted By Jessica Gaines Jarboe on Sunday, June 05, 2011 10:52:00 PM  |  Comment on This Post
You may remember the motto - "Be Prepared," from your time with the Boy or Girl Scouts. In Louisville, we should all take this motto to heart 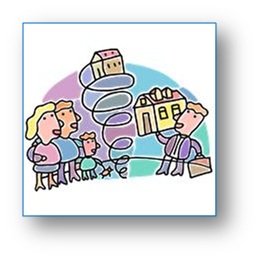 and make it a part of our lives.

As you know, Kentucky has a history that includes both floods and tornados. These include the historic flood of 1937 and the devastating tornado of 1890. There was not another major tornado in Louisville for 84 years until 1974, but that was a douzy. Out of the eight states affected by this nation's second deadliest tornado outbreak this April, Kentucky fared much better than the other seven states.

Due to its close proximity to the Ohio River, Kentucky is prone to floods. Two such floods occurred in March, followed by another one in April of this year.

Why am I telling you all of this? I want you to Be Prepared. As one of Louisville's top real estate agents, I would be doing all of you an injustice if I did not address the affects that Mother Nature can have on our homes and our beautiful city. However, I will tell you that I wouldn't live anywhere else. I know of no city, state, or nation that is exempt from the wrath that Mother Nature can leave in her path.

What I do want to stress is that we all need to Be Prepared. For most of us, our homes are our biggest investment. We must protect this investment....

Posted By Jessica Gaines Jarboe on Tuesday, May 10, 2011 8:10:00 PM  |  Comment on This Post
biggest outbreaks of deadly tornadoes we have seen in the last 37 years. It brings back haunting memories for many people in Louisville. In April of 1974 the Tornado Super Outbreak touched the lives of the people of Louisvillein a very dramatic way. But out of the devastation, one Louisville neighborhood came back stronger than ever! There is hope for those communities that have been destroyed; may you find hope for rebuilding after the storm in the story of Louisville's Crescent Hill.

Just four miles east of Louisville's downtown area, you will find Crescent Hill. One of the first things people notice about Crescent Hill is the small hometown feel. Frankfort Avenue runs right through its heart with shops, bakeries and great places to eat. This road was actually the original pioneer road; the Louisville-Lexington Turnpike. Crescent Hill was officially annexed into Louisville in the late 1800's and was a thriving community where the prominent citizens of Louisville lived.

Crescent Hill has always had a great sense of community, the residencts have taken great pride in their town. Over the years, several neighborhood clubs have emerged to keep Crescent Hill a thriving community. These clubs have helped this small suburb overcome many obstacles brought to its doors by changing times and even by Mother Nature herself.

Crescent Hill faced several challenges in its history. The city opened its doors to its neighboring communities in 1937 when downtown Louisville was flooded. It survived the great suburban exodus of the 1950's. But it was the storm of 1974 that dealt the greatest blow as a tornado nearly destroyed the area.