Welcome To The Revitalized Kentucky Kingdom

Whether you live in Louisville or just love to travel to amusement parks, you are probably happy to hear that Kentucky Kingdom is open again after five years and several futile attempts to revive it. Although some parts of the park are not open yet, investors have spent nearly $44 million to date to add 20 new attractions and double the size of the water park at the old facility. The prime attraction which has drawn attention from roller coaster lovers everywhere is the new Lightning Run, a blue GT-Hyper coaster developed by ride manufacturers Chance Morgan Coasters.

A New Park Rises From The Ashes Of Rundown Six Flags

Last known as Six Flags Kentucky Kingdom, the park was operated by Ed Hart until it was sold to Premier Parks in 1990, which in turn bought Six Flags and turned the local park into part of its chain. In 10 years, attendance dropped to half of what it was in 1998 and as the LA Times put it, turned the park into a used ride lot as it sucked off popular attractions for its other properties. The company put virtually no money into it, so it lost visitors to Kings Island in Cincinnati and to Holiday World in Santa Claus, Indiana. During a corporate bankruptcy in 2010, Six Flags closed the park and located popular rides such as the Chang Stand Up Coaster and the Road Runner Express to other parks.

After closure, there were several attempts, including one unsuccessful one by Hart investors, to reopen the part. The last hot prospect were the owners of Holiday World, who backed out after claiming the park was in too much disarray to economically restore. Hart was finally successful in obtaining rights from the Kentucky State Fair Board to reopen the park.

Aside from the new coaster, the park, which we opened May 24, includes many old favorites, plus a few new surprises. So far, the park has met with great reviews,...

Things To Chew Over In Louisville

If you grew up in Louisville, you know that the food is great here. Southern Living Magazine just confirmed this by including several Louisville restaurants to its Top 100 list of Places to Eat Now. This is great news, as it showcases some of the many fine eateries in our city.

Area restaurants on the list are Seviche restaurant located on Bardstown Road in the Highlands, 610 Magnolia in Old Louisville, and Milkwood and Proof on Main, both downtown. Seviche is a recent recipient of USA Today's "Ten great places for Latino flavor and flair." There are plenty more great establishments where you might enjoy meal for a special occasion.

From Fine Food To Fair Food

However, if you live here, you know that fine dining is not the only good food we have in town. As anyone who has been to the recently-ended Kentucky State Fair knows, what is offered at local fairs and festivals is pretty tasty though it wouldn't make Southern Living.  Much of what is served at the fair is on a stick, but decadent funnel cakes and burgers on a Krispy Kreme donut, make for a tasty handful. This year, even chicken and sloppy Joes are served with donut buns. Much of the food is what is served at any fair, anywhere, but specialties like Fried Derby Pie gives it a local flavor.

Food From A Truck

For the first time this year, the Louisville Food Truck Association was allowed to be at the Fair to offer an alternative to fried food. Offering a variety of sandwiches, fish, barbeque, pretzel rods, noodle bowls, and Bourbon Ball Brownies and other treats to cater to a variety of palates, the food trucks offered choices that were a bit healthier. These food trucks are a fixture at most Louisville events and even park downtown sometimes. You can see some of them at this weekend's this weekend on August 30 at the Maker's Mark...

Pets On Vacation In Louisville

As you enjoy the summer, take in the local sites and festivities, and maybe even plan a trip away from home, you are never on vacation from your furbabies if you are a petowner. Should you take your pets on vacation with you? Whether you include your dogs in your plans or leave them behind when you take a trip, you must consider their wellbeing and make arrangements for them.

Should Pets Go On Vacation With You?

Many pet owners want their pets to go everywhere with them, but this is not always possible or even a good idea. Not all places are pet-friendly and for good reason. Loud, crowded environments can make your pets nervous, and in some settings, having your pet there can infringe on the rights of others. Before taking your pet to a new setting, plan carefully to make sure your pet will be welcome, as well as comfortable. Many public events, such as this weekend's Forecastle, as well as many events at Waterfront Park, prohibit pets.

On the whole, Louisville is a pretty pet-friendly city as long as you are in control of your pet and clean up its waste. Here are a few things to consider if you planning to take your pet with you when you enjoy the city.

Walking your dog: Even if you have plenty of space for your pet to run at home, dogs are social creatures who benefit from interaction with other pets and who like to explore new things. Louisville has a chain of dog parks where you can let you dog run off leash, as long as you follow the dogpark rules. If you walk your dog on public streets or in Louisville parks, you need to keep him on a leash and pick up waste.

Dogs and dining. Most bars and restaurants do not welcome dogs (other than service dogs) indoors due to health regulations, but there are plenty of places where...

Drinking In The Best Of Louisville On the Urban Bourbon Trail

If you live in Louisville, you take for granted some of what people elsewhere marvel at. We are known for our bourbon here, and within the region, many major distilleries have set up shop. If you love bourbon or are fascinated with its history, you can visit the manufacturers along the Kentucky Bourbon Trail or follow the Urban Bourbon Trial that wends through local bars and represents seven Kentucky distilleries. An eighth distillery is joining the mix this fall as the historic Evan Williams' Distillery recreates its 18th century glory.

Urban Bourbon Trail And Beyond

This in itself is a plus. Some friends who wanted to try the famous Scotches made in Scotland were unable to find a similar tour in that country without arranging an expensive custom tour. Here, you can either take a tour through a company such as Mint Julep Tours or follow a self-directed one through Louisville, Lexington, Versailles. Shepardsville, Bardstown, and other cities. To help in planning your journey, you can download a "passport application" at bourboncountry.com or at the Louisville Convention & Visitors' Bureau. You can collect stamps when you visit each location and earn gifts in the process as you sample the best of Kentucky.

If you take the Urban Bourbon Trail, you can stop off at locations such as the old Seelbach Bar, the Brown Hotel, and Proof on Main to sample not just straight bourbons but specialty drinks like the Mint Julep and other local favorites, such as the Hot Brown Sandwich or foods enhanced with bourbon-laced mustard, sauces, and dressings.A New Twist On Local Bourbon

While you'll find bourbons from major distilleries such as Jim Beam, Wild Turkey, and Maker's Mark on the tours, some foodies hail the growing body of craft whiskeys.... 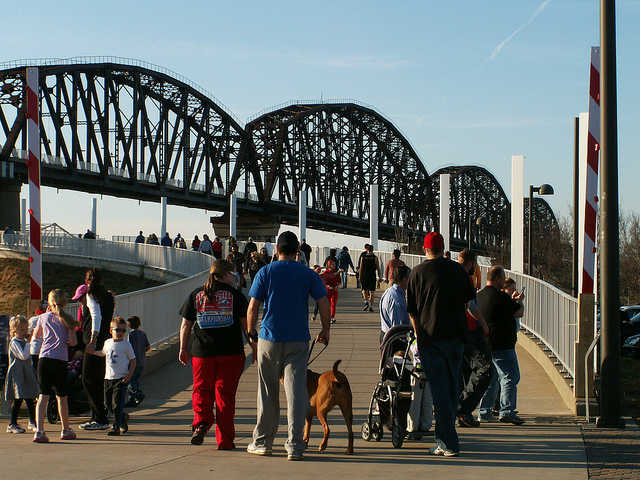 In Louisville, we love our history and are committed to recycling and refurbishing old buildings, landmarks, and structures. One such structure, the Big Four Bridge, was rescued from the obscurity and is on its way to being a vital part of Waterfront Park and among major Louisville attractions.

Originally built to connect Louisville and Indiana back in 1895 when Louisville was a major commerce center, the bridge was mainly used as a railroad bridge for the Cleveland, Cincinnati, Chicago, and St. Louis Railway, aka the "Big Four Railroad." Ultimately the railroad became part of the New York Central Railroad, which was swallowed up by Penn Central in 1968. The Bridge was closed down and the approach spans on both the Kentucky and Indiana side were dismantled and sold for scrap, while traffic was rerouted to 14th St.

It became the "Bridge That Goes Nowhere,” and mainly worked on its rusty tan, as one blogger commented. In the 1980s, local radio station lit the remains up to cleverly promote a “Bridge the Gap” fundraiser for the needy. The president of Costa Rica tried to buy it for disassembly and reconstruction in his native land.

New Life For The Bridge

Finally, in the 1990s, the bridge was seen as a perfect pedestrian walkway and cycling path for Louisville Waterfront Park and the ongoing waterfront revitalization. Both Kentucky and Indiana applied for federal grants in solicited private money to fund repairing the structure, lighting it, and building ramps to access it. In February 2013, the Louisville entryway was open, with the Jeffersonville,...